I am writing to you to seek the immediate reversal of the State Government’s proposal to demolish the Yarra Building at the Federation Square Precinct in place for a new Apple Store, as announced on your Facebook feed on 20/12/2017. We as Victorians deserve to have our cultural institutions and public places, regardless of their age, protected for the use and enjoyment of future generations, but we also deserve to have our say. Based on what Victorians are saying on social media, my take is that the electorate understands public land and places such as Federation Square are places where communal cultural memory and history is made through the cultural activities that occur, and that they are for the public good first and foremost, above all over interests.

The announcement to demolish the Yarra Building runs counter to this understanding, and shows that the State Government is prepared to sell both the process (considered urban design with the involvement of the public) and the product (leaseable commercial retail space) to the highest bidder and not acknowledge that this building sits within a context which has generated significant cultural capital since opening in 2002.

There are several issues I want to raise with you for your consideration.

Federation Square is probably the most significant public space in Melbourne, and any future works and proposals are worthy of a considered response from Design Teams best able to deliver these. Obviously this shouldn’t be limited to that of Melbourne or nation-wide practices, as was the case with the recent Flinders Street Train Station redesign proposal, or the original Design Competition for Federation Square held by the State Government in 1998. The State Government has several precedents for holding an EOI and design competition process for significant public buildings.

If the State Government took the time to produce a Request for EOI, which includes writing a design brief, budget and timelines for the project, at least Design Teams can compete on an equal playing field based the RFEOI information and respond appropriately.

Futhermore this type of process gives the proposals the opportunity for critique and review by peers in the profession but also accept public submissions. Obviously the original architects LAB would be part of that selection panel. The current proposal is devoid of this process, and sets a worrying precedent for future public projects in the State.

2) Selection of Fosters and Partners as Lead Consultant

Notwithstanding all of the above, there is an elite design and architecture culture here in Melbourne. You would be familiar with who the main firms are that work on projects of this scale and public significance. The size of the architectural practice doesn’t necessarily lead to the design success of the project, but even so the smaller practices that enter design competitions for significant public buildings would all have their own love or hate of Federation Square, but at the very least an appreciation of the cultural context which the precinct sits within and has generated over the years by virtue of their immersed experience.

As Donald Bates pointed out in the Sydney Morning Herald on 21/12/2017, the everyday experience of Federation Square as casual waypoint, where the lines between civic and cultural life are blurred – it is seen as a in-between destination from the train to the footy, or to the gallery, or wherever. Design Professionals from Victoria have an experience of this, they would understand this and have an appreciation of this notion.

On an economic level, selecting a local firm keeps high-skilled jobs in the country, and this idea is easy for any politician to sell.

3) Design Response of the proposal ignores the context

The Yarra Building acts as something of a shield of the view of the main SBS / ACMI buildings from the Yarra River approach, and creates a sense of surprise when we move from inside and outside of the precinct from this approach.

The new design could be described as a modernist pagoda, a pavilion style building that is outward looking and through the use of extensive glazing and slim lines is elegant in its presentation – if it were viewed in isolation. But the context is messy, disjointed, maybe even a bit ugly! The buildings at the precinct somehow come together with complex geometries, and the Yarra Building is part of the equation – the success of the design is because of the sum of its parts rather than any individual building standing out. 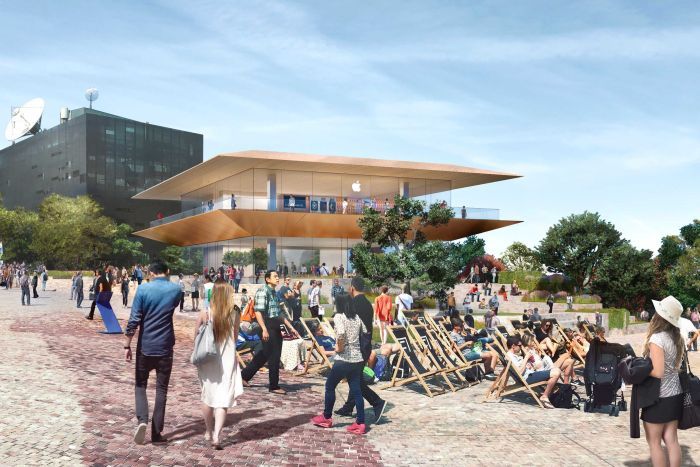 The current design for the Apple Store could be described as being sympathetic to its context in its simplicity, but it is an easily repeatable design. You could locate this building pretty much anywhere – what is it exactly that makes this building special to its place and cultural context?

Let me put it another way – McDonalds, Aldi, Bunnings, Safeway et al do a very good job of being able to set up shop reasonably quickly with their own off-the-self store designs. There is a level of familiarity here when we approach these buildings, they all give their customers some kind of reassurance. We all know as soon as we pass the Golden Arches, (or the Gable End Roof at Bunnings, complete with trellis facade) that they know what they are getting into – goods and services at great prices, complete with guarantees and assurances. However, none of these buildings respond to their place or cultural context – only in that they offer goods and services in exactly the same way that their fellow stores do. 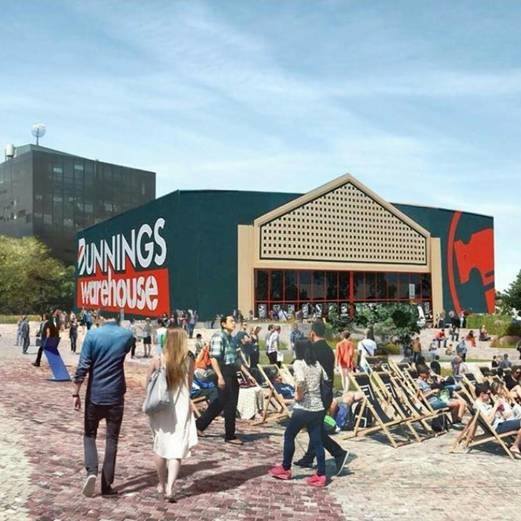 So again, I ask the question what is it that makes the Apple Store special to its place and cultural context? What place does it have to be at Federation Square in its own specific building on this scale?

Commercial business are not incongruous with the Federation Square precinct – it has always been part of the makeup of activities here, but businesses have managed to fit their operations within the existing architecture and urban environment. Over the last few years I have noticed food trucks and “pop-up” stores open shop on the Flinders Street plaza and steps, and these are great for civic engagement. If the Yarra Building is in need of alterations for a future tenant, then Apple or any other business could fit into the space and still maintain the existing conditions and design integrity of the precinct. Rather than total demolition of the Yarra Building, re-purposing it could be seen as an environmental act – this would save a lot of money in capital costs and still get the State Government the same result, and the overall precinct is maintained.

4) Apple is a successful business, they don’t need State support

There is more than ample leasable commercial within Melbourne CBD. It truly seems redundant to write this, Apple do not qualify as a business that is in need of State support to establish a premises in the city.

I am sure they can find a tax-positive way to find a suitable, centrally located tenancy in the CBD so they can continue to sell their products – without the need for State support. I own an iPhone 6+ and it’s a great piece of technology, for which I was prepared to pay. But surely supporting a successful business which pays dividends to its shareholders is not a great investment for the State Government.

The State Government’s proposal for the Apple Store design by Foster and Partners has completely ignored the public consultation process that most, if not, all significant public building projects go through. The public has a great deal of cultural capital invested in the Federation Square precinct, and this includes the Yarra Building. Furthermore your announcement for the project days before Christmas has not given the Design profession ample time for the project to be critically assessed, and assumes that public submissions will not be accepted. It appears the goal here is to get something done, quickly, for the benefit of a multinational business, rather than doing the right thing by all concerned.

If demolishing the Yarra Building is the intent, then the State has the opportunity to have a truly great piece of architecture that acknowledges the context by taking a few steps back and conducting a thorough Expression of Interest for Design Concept Competition rather than rushing the process.

Federation Square is a much loved and much used precinct, the public deserves a considered response to maintain the cultural heritage this space will continue to build.